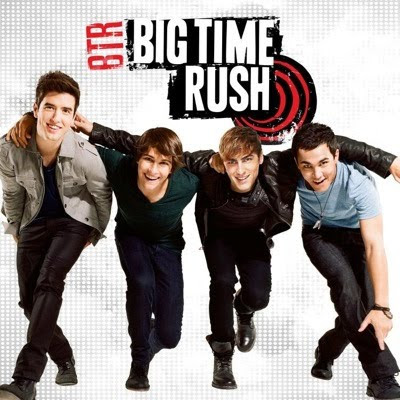 So here’s the thing. I love boy bands. This shouldn’t come as an enormous surprise, given there’s a whole category to the right somewhere called “this must be pop.” (Which, aside from being about pop, is also an *NSYNC lyric.) So last year when my awesome BFF Jess suggested we should keep some sort of official look out for up-and-coming boy bands, naturally I was all over that. And thus, the Official Tweenage Wasteland Official Boy Band Watch was born!

Aaaand also not a surprise, if you’ve poked around here before (or spoken to me pretty much at all in the last few months), I adore the Nickelodeon show Big Time Rush, which is, of course, about a boy band named Big Time Rush, who have recently put out an album titled (just to be different)… “BTR.” And naturally, Jess and I had to rate it.

So here it is! OTWOBBW: Big Time Rush. (Bonus, we spruced up Tweenage’s layout a bit, so now the text isn’t squished into such a small column. Check it out!)

The Brooklyn Book Festival was a couple of months ago. I’ve meant to go every year since I moved to New York, but Brooklyn is far away and things come up and blaahhhh. Anyway, this year I finally did! And, as one does at such things, I bought a lot of books. The first one I tackled was Meet the Annas: A Musical Novel by Robert Dunn.

The book basically plays what-if with a fictional 1960s girl group, the Annas. It’s told from the POV of Dink Stephenson, one of their song writers, looking back at what happened years later. He was in love with the band’s front woman, Anna Dubower, and eventually proposed to her as the girl group era passed and they were desperately trying to manufacture a hit to bring them back. Anna didn’t give him an answer, and weeks later, was mysteriously dead. Now there’s a rights dispute over that last song, Dink has to go to court over it, and running into people from that old life stirs up old memories. At last, he’s determined to figure out what happened to Anna.

I was pretty ambivalent when I first finished this book. In the months since (I am waaaay behind on my reviews) the ending has festered, and now I find it enraging. I’m going to cut here because the book is sort of a mystery. I found it super obvious, but your mileage may vary. END_OF_DOCUMENT_TOKEN_TO_BE_REPLACED

I don’t have a heck of a lot to say about this one. Overall, I really liked it! But I have one major quibble that kept it at 3.5 cupcakes instead of 4. The full review is over at Active Voice, though it’s maybe the shortest book review I’ve ever written.

My office is on the 16th floor. This evening, I left work, got in the elevator, and it went down, oh, fifteen and a half floors. Then it went kerTHUNK and stopped. I was stuck there for an hour.

The world of Wired (the third book in Robin Wasserman’s trilogy) is an eerie dystopia where the have-nots die young in cities, get sick from the nuclear fall out, and everything is controlled by mega corporations. Not a great place to live. On the other hand, the handful of wealthy people have technology advanced enough to put human thought patterns into a mechanical body. Presumably, their elevators never, you know, just stop between floors for awhile. So hey, silver lining.

An actual review is over at Active Voice.

@HeyGeek I was in a restaurant recently that had some nice pottery on display and I really wanted to smash it.
- Tuesday Feb 18 - 3:40pm

@akaHarriet idk what this is but we should watch it for the podcast https://t.co/qufBIoS8ok
- Sunday Feb 16 - 8:14pm